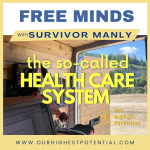 Is Today’s Health Care, Really Healthcare? Can you discern how to step into your God-given health, let God do the surgery and the healthcare in your temple?

In a time where the call for free universal healthcare seems prevalent, Free Minds Podcast points to the stark reality of what healthcare has become. A money making machine, the crutch it truly is. And the message of hope available to ALL, there are effective steps you can take NOW to free yourself and step into your true God-given health within your temple. Listen up, right to the end for some nuggets on true health care and what it takes.

Free Minds Podcast this is Christo, I have thoughts on the “so-called” healthcare system. Healthcare, healthcare, what is healthcare? Well, as defined by the current unreality, healthcare is the dispensing of harmful drugs, surgeries, and other “break the glass in case of emergency” type approaches to so-called “Health” and really just a system that allows the propping up of people who are unwilling to deal with their health issues, with their sickness, with their dis-ease in their bodies.

None of them are being told to fast. All of them are being taught that fasting is dangerous unless they have a doctor who’s kind of speaking outside of the box, which is the case for some. But really, what do you see? What do you see with healthcare? We see people that are walking around barely, most of them, many of them in carts.

On a side note, we have a plandemic right now. If it was an actual issue, where there were just tons of people dying, especially the weak and aged, and they’re dying from some I suppose it virus. Which they’re not. They’re dying from within. You see, but if it was the case, Walmart would have lost over half of its clientele by now. So this is bullshit.

So here we are: healthcare. They call it healthcare, and it’s drugs and knives and misleading advice. And that’s putting it very kindly. And they don’t deserve for me to be doing that. They don’t deserve kindness, that industry. And I’m not speaking personally about every doctor out there before anybody tries to get offended and turn off what they’re hearing right now.

But know this, what they call health care is just propping up people that are making very bad decisions with their health and not fasting. And you have Christians out there who are claiming that “Well, Doctor, doctors were put into place by God.”

I mean, this is basically the the way, it’s said that doctors are put into place by God, God made doctors for a reason. No, No, he didn’t! God didn’t make these guys, God does not lead these people. These people are not connected to their highest self or they would be on their way out of this industry. There are people that got into it. I know people I know doctors who are still doctors, but they’re working their way out of this rotten system right now. Because they are, they know that the natural approach is the only approach not the allopathic drug and butcher system.

And it’s not care. It’s pain management. That’s all it is. And the pain is increased. Because the stuff they give you to regulate your pain to dull your senses to unplug your check engine light is that is the equivalent of what you’re doing. When you take a pain pill. You’re unplugging the check engine light, how in the hell are you going to know what’s wrong with you or what’s damaged? What because you go to the doctor and they take some blood tests, you’d rather have them stick a needle into you than to actually take care of your own health. You’d rather go through that pain of them cutting you open, than doctoring your health by turning off the motor, ie your body and letting the mechanic aka God, your body, your temple heal itself.

It’s kind of disingenuous, right? It’s kind of cheating yourself, don’t you think to be that way? Just a suggestion.

First off it shouldn’t even exist. As it stands. What it is right now is garbage. It’s a scourge for humankind that we have healthcare.

You don’t even have the damn strength or willpower to do an effing thing about your issues. You’ll let your whole family grieve over you. Why? Because you’re too lazy to look into the truth. Because you’re too addicted to stop doing what you’re doing, you’re obviously destroying your health with what you’re doing. Pretty much everything that’s happening to you is because of choices you’ve made, actually everything that’s happening to you just about, and I’m not talking about kids that are born with deformities and stuff like that, before people start trying to contact me with that kind of BS.

I’m talking about you cheeseburger eater, fat guy, fat woman, whatever the F you’re doing to continually increase your mass. Stop! Stop doing it, you’re killing yourself. And then you think you should have free healthcare that I should pay for that. Screw you. No, I shouldn’t pay for that. I shouldn’t pay for any of that crap. And it shouldn’t even exist, you should be forced to feel the pain of your own damn choices. But instead, you know what you do? You dole it with their painkillers and their surgeries and their bullshit, and everybody else pays the price and you do too. But then everybody else has to get involved with your BS, everybody else has to watch you wither away, watch you not be able to do anything anymore.

Because you have this blind faith and trust in an industry that is run on profits. Guys, it’s not like what the movies show, you don’t have doctors floating around with halos. Okay, they don’t, they don’t have halos. They have horns, this industry has horns, not every person in the industry, many of them joined because they thought, you know, nurses like my sister, they thought they were joining because they were going to be a part of something that was great for humanity. Well, it’s not, it’s not, it’s terrible. It’s allowing you to live in your stupidity and your bad choices. And it causes others to have to deal with the results of your choices, you know, who should deal with the results of your choices.

You and you alone should deal with the with the results of your laziness with your apathy, with your blind faith. But you know what, you know what the good news is, no matter what you do and what’s even better. They’re still functioning. You can zero it out, you can hit the reset button, you can do it! You can do this and there are steps.

You don’t have to jump right in and stop eating right away. There are steps to do this. I personally happen to have coached approaching 300 people in the last couple of years, last year and a half. Couple years, I haven’t counted exactly how many months, because I wasn’t planning on doing it. I had people literally, not begging me. But I had people asking me to start coaching. I was overwhelmed. I was doing it for free. And I just started charging. I had to, I had too many people contacting me. And yeah, I’m not trying to sell anything, but I can help anybody.

So getting back to health care, healthcare is just pain management. And it should not be free and it shouldn’t even exist, best yet would be didn’t exist at all.

You just had emergency break your bone, the doctor fixes it, you know, someone punches you in the eye, you don’t need a doctor for that your body heals itself, just stop eating, and let the body heal and there’s other answers to so there’s hope and it’s not in the medical industry and it’s not in quote unquote, “free health care.”

Because it’s not free for anybody. Everybody pays the price of your poor choices and your poor health that are a result of your lifestyle. So see who this reaches out there. I wish everybody the best. Love you all, you are limitless you truly are. But the first step is to remove those addictions.

So let’s do this. Take care everybody signing off.