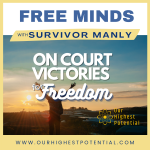 Free Minds with Survivor Manly
On Court Victories for "Freedom"

Can a court declare you free? Is that where we go to attain our freedom? Tune into this short but powerful discussion on where your freedom truly comes from and why it matters that we take the correct stance. Chris recorded this short podcast in response to repeated messages about victories in court for so called freedoms. It’s time to open your eyes and see freedom for what it truly is. Share this with friends you know need to re-member their freedom now!

Free Minds Podcast this is Christo.

Here’s the thing. There’s a lot of people going through courts to try to get freedom. I’ve seen this.

Even if that bullshit was real, they are not to tell us what to do, period. Even if there were dead bodies in the middle of the street because CO-VID was real. I don’t have to do anything they tell me. That’s freedom. That’s true freedom.

So people that wait and watch for this kind of stuff are the usual people that believe in authority over them. So I’m just telling you, I don’t care about their corrupt courts, or fake laws or anything else.

The only thing that matters is natural law, which means I don’t harm anybody. I live peacefully and do what I want with myself. As long as I’m not harming anybody.

And then something real, supposedly, you know, they’ll make something up. Something that actually does kill people. comes along and then they’re saying “Look, it’s valid.” So the lockdowns are valid and what are the people gonna say then, you see?

This is a straw man, they’re setting up so that they can knock it down later if they decide to come out with something that actually does, that is valid, that is killing people course by them, dropped from planes or wherever they want, however, they want to do it.

But this is setting up a straw man and it’s keeping people in the paradigm of looking to leadership, looking to courts, for what their rights are.

I don’t fucking care what the court… I don’t care about the Canadian fucking court. You know what I mean?

This it’s on this whole system fucked down. This is one of their little ways of trying to stay relevant, and they know they’re losing their relevance. So they have to have little victories for the peasants, “Oh, look, peasants. You just won a court decision on {uhh}… No, now you can be free…”

Fuck you! I’m free now and I’m free forever, no matter what they try to do.

And this is one of the little ways we do it right here, as we look to leaders in courts instead of just exercising our rights no matter what, no matter the death count, no matter what’s in the vaccine, whether it’s organic, air straight from Jesus doesn’t matter.